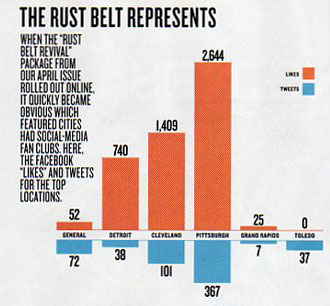 Which social media platform for your business?

These days, I’m recommending Facebook. The image you see is a poll taken by Details magazine (June/July 2012), tracking which of their readers tweeted about or liked a particular city in response to an article. Facebook had nearly ten times the responses than Twitter.

Admittedly, Details readers may not represent the people who your business is focused on, but I thought this was an interesting random way to see involvement on both platforms.

And Google+ wasn’t even in the comparison. It’s a ghost town over there.

Interestingly, Toledo was the only city that had more Twitter responses than Facebook. So if your business is focused on Toledo, maybe you should consider using Twitter.

Footnote one: I do not like Details very much. It’s just not my cup of tea. I briefly look at each issue, because I got a free subscription.

Footnote two: I could not find this poll online. Thus, I scanned the infographic from the actual printed magazine. (Remember print?)