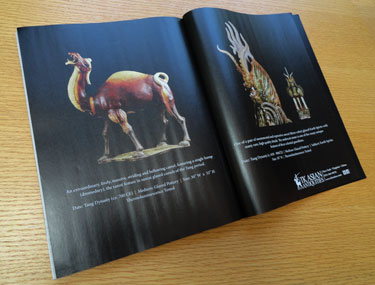 Sometimes I’m just amazed at how a company will waste their promotional budget.

TK Asian Antiquities is a dealer of ancient Asian art. They paid for a twenty-page ad in the June 11, 2012 issue of Fortune magazine. Whatever they spent was too much. Four pages of the best content from that ad would have been enough content, as the entire ad looked the same, end-to-end. I did not read anything except a full-page quote about how valuable stone is. I am not their target audience, but I venture to say that a tiny minority of Fortune readers are their audience. Those Fortune readers who invest in antiquities likely subscribe to magazines that feature antiquities.

Whoever did the mini-magazine’s design had little skill. Each spread is unrelentingly black. White type on black is generally harder to read than black type on white. Most of the two-dimensional featured artwork looks just plain muddy.

And you will note that they are not watching what’s being said about them. (See any comments from them on this post?)

So let’s spend our money a little more wisely, companies.

Pinterest
Tagged advertising expenditure
We use cookies to ensure that we give you the best experience on our website. If you continue to use this site we will assume that you are happy with it.OK