“If that happened one night in America, it would be on the cover of Newsweek.”

I’m not sure if you’ve heard of the Kony tidal wave that has been spreading virally across the web. The group Invisible Children would love your support to pressure the US government to find the tyrannical leader of an Ugandan rebel group, Joseph Kony.

Mr. Kony is indeed a scoundrel of the highest (or lowest) order. And I am in complete agreement with the idea of tracking him down and bringing him to justice.

Many have criticized the 30-minute film as being sensationalist. (Click on the thumbnail below to view it.) And that Invisible Children’s CEO Ben Keesey’s methods might not be perfect. I’m sure that some of the criticisms are true. But I’d suggest that the best way forward is to consider the good that could come of supporting this initiative rather than picking at the bad. None of us are perfect!

Africa is just not high on the USA’s foreign agenda. Libya is an exception, maybe because of their huge oil reserves. As my opening quote from the film implies, crises that are part of daily life in Africa just don’t make the headlines in the States as much as a kitty cat stuck up in someone’s tree.

“Where you live shouldn’t determine whether you live.” But it does. And even Invisible Children can’t change that. Even if every single person in the States rallied around this cause, there still would be poverty on the other side of the globe. That doesn’t mean we should turn our backs in frustration. Every little bit helps.

One criticism from me: at some level, I object to the idea of asking people to put up posters up in public places. It can be breaking the law. Maybe if people asked property owners if they could put up posters, the posters would stay up longer. I also realize the value of doing something now, whether it stretches boundaries or not.

Maybe the public’s willingness to focus on Kony is just because of the media spotlight. Or that it’s a convenient focal point for mass frustration with society’s ills. But it’s good to bring those frustrations to the surface and do something. I’m thrilled to see that more people watched Kony on YouTube than the latest Lady Gaga video. Maybe there is hope.

Apologies that this post falls outside my normal subject matter. But I thought you would want to know about this.

Update: I’m sure by now you’ve heard of the news of Invisible Children’s founder Jason Russell’s fall from grace that happened since I wrote this post. That is truly sad. And it highlights what can happen when a massive amount of fame comes very quickly. Also, Invisible Children has had quite a bit of scrutiny, and it appears that they are not very accountable in many areas. So you should investigate further before investing with them. However, I am glad that they brought to light some of the horrible things that are happening in forgotten parts of the world. And it is good to do something. Just choose wisely. 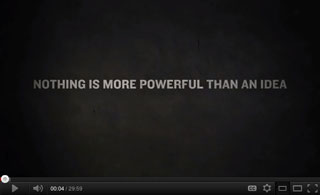