Blackberry is in the process of dying. I was surprised to see a recent Wall Street Journal editorial shouting the virtues of an old Blackberry phone. Mr. Allan Ripp declared to the whole world that he is not relevant within his chosen profession, press relations. His rant against smartphones was similar to shouting in 1980 […]

Do you want your messages to hit the target? Read on… The “bad” email shown at right came to me unsubscribed. I quickly clicked the unsubscribe link – since I didn’t ask for it, since I had never heard of the company, and since their message didn’t seem different from the sea of messages already […] 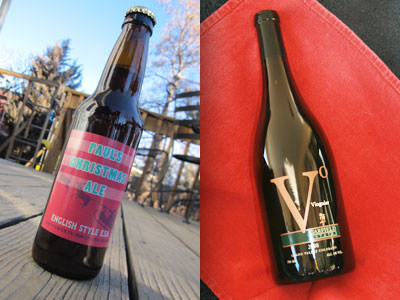 Garfield Estates is a Colorado Western Slope winery. We have designed nearly every one of their labels. Paul’s Christmas Ale was a very short-run ale, brewed during the cold winter of 2011.

Watering Down Your Brand

Perrier teamed up with Andy Warhol for a series of limited edition bottles. The problem is that the bottles are a long way from Andy Warhol’s original art. (The top photo shows Perrier’s plastic rendition. The bottom photo shows Mr. Warhol’s art.) Since Andy Warhol died in 1987, he cannot speak up for maintaining the […]

There are a few easy things to do that will keep your social media presence looking and working right. 1. Carefully watch how your auto-posting applications work. This screen shot shows a content creator who was not watching. When someone sees the same post two times in a row, they know the source didn’t care […]

Here are two very quick tips for improving your blog: 1. Do not require comments to be approved before they go live. By insisting on comment approval, you take away instant gratification from your readers. People love to see their blog posts go live right away! By allowing comments to go live instantly, you have […]

We use cookies to ensure that we give you the best experience on our website. If you continue to use this site we will assume that you are happy with it.OK